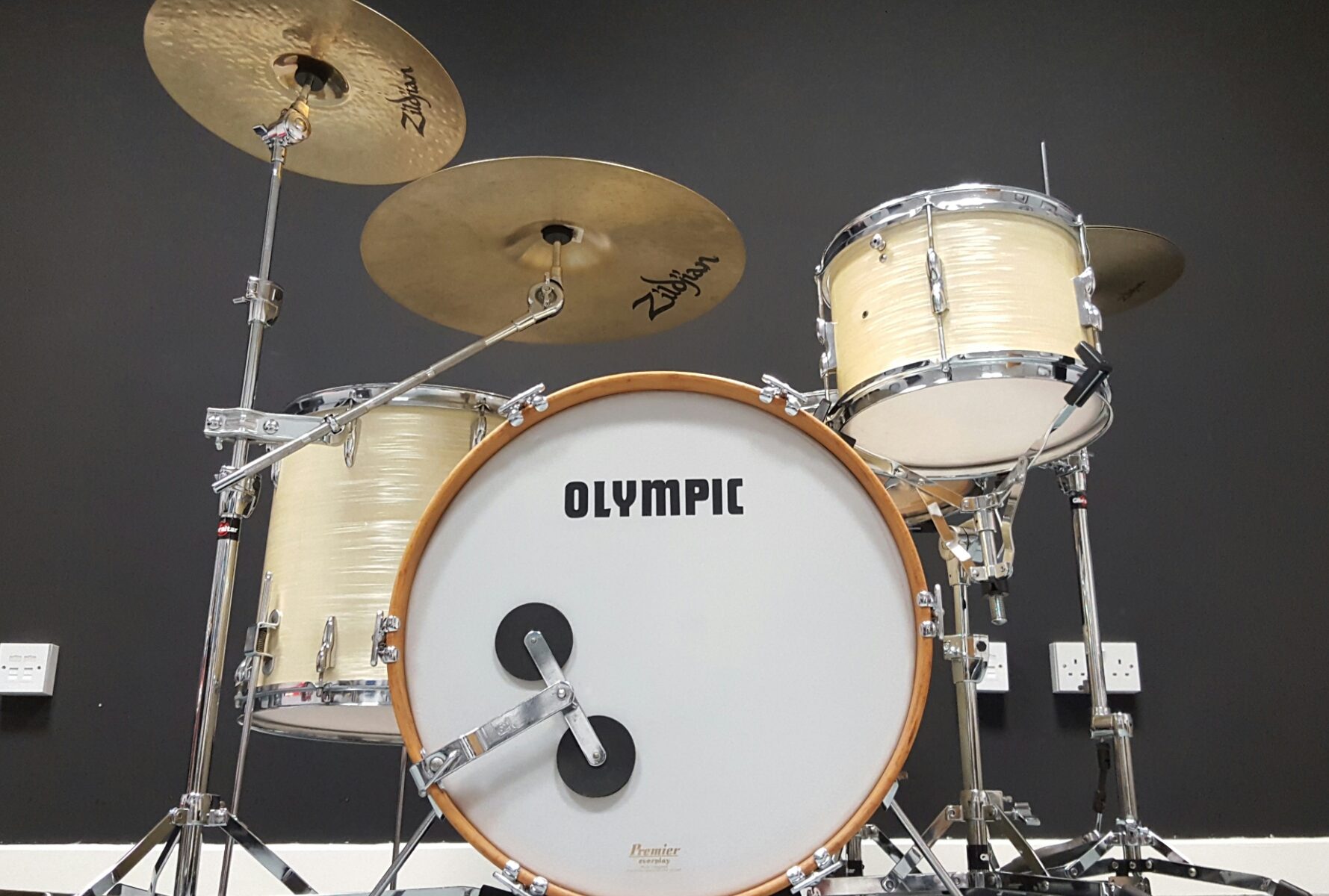 I would highly recommend a restoration to any drummer who has some spare time. The art of dismantling, cleaning and reassembling drums helps us to understand their design and construction on a deeper level and we can gain more respect for the instrument when we put time, care and effort into bringing a drum kit back to its former glory.

This lovely little drum kit on the restoration bench belonged to the late Delvin Stonehouse – A session drummer who worked with the likes of Mike Batt of the Wombles amongst many other artists. This was his personal drum kit – An early 1960s Premier Olympic ’65’ Outfit in white silk pearl finish, which he owned from new when he was 15.

According to Delvins wife, He played with a group called ‘The Waffle’. Cutting their teeth in halls and pubs in his early career. He met and played with Mike Batt in 1968 – the band were called ‘The Fat Ladies Twin’ – with their trademark black and white jackets, they frequently performed at the Railway Inn in Eastleigh. Mike Batt formed The Wombles (Mikes mother made the Womble costumes) but Delvin fell ill with Crohn’s Disease and could no longer play as much by then so could not commit.

The drum kit had been modified over the decades, which is fairly common – especially in the 1970s when many drummers added more tom tom drums to the smaller kits of the 1960s in order to play louder, more popular rock music at the time. Some of the badges were removed and I can only speculate that this was done as to hide the identity of the drum kit as being a ‘budget’ kit. But as many vintage drum enthusiasts may know, Olympic drums were simply drum shells which were not deemed high enough a quality to be used for top line Premier drum kits – these drum shells obtain the same specifications as the top of the range but were fitted with less hardware and sold as budget drum kits.

Here is a list of the restoration work carried out on the drum kit:

This restoration took approximately 30 hours over six months not including sourcing replacement parts. The retro look and feel of the drum kit makes for a real delight to play – the photos of the kit are excellent but this kit needs to be seen and played to fully appreciate its beauty.

The replacement parts seemed to just appear at the right time on Facebook forums without having to seek them out – maybe it was meant to be! It was a real pleasure to work on this kit and I hope Delvin would be happy with the results and that this beautiful little drum kit will give another drummer a great service for the next 50+ years.

The natural oiled finish for the bass drum hoops were inspired by both Jamie Corstorphine of the Drum Vault and Darren Hambling, who is a member of the Vintage Olympic Drums Forum on Facebook who also restored a kit of the same finish.